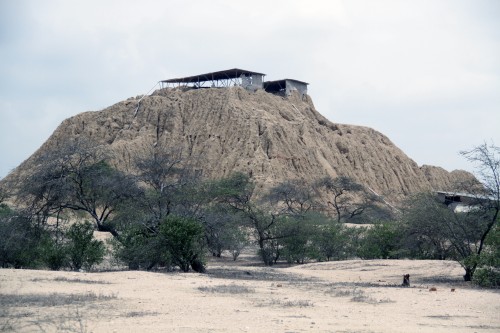 I woke up one morning in Chiclayo to be told that we were going to Túcume. I shrugged my shoulders and said okay. I had no idea what a Túcume was, but I was open to seeing it. Okay, I’m playing my ignorant gringo card a little too much here; I knew that Túcume is a place to visit. I just didn’t know what I’d be seeing there.

We took a taxi to downtown Chiclayo where we stopped for breakfast. I decided to try the desayuno americano, just to see how well the Peruvians made a regular American-style breakfast of eggs, bacon, hashbrowns, and bread. I wasn’t disappointed, although cooking anything American-style is hard to screw up. From there, we found a taxi that was willing to take us to Túcume. We could have taken a combi, but this time, we opted for the taxi.

Less than an hour later we were standing at the entrance of the Túcume Archaeological Museum where I paid the entrance fee of 8 Soles per person and we wandered into the museum. The museum itself is relatively new, just having opened its doors in early 2013. We looked at all the exhibits and the scale models of the pyramids that were a part of the archaeological site.

I thought to myself, “Oh! There are pyramids here. Cool!” That turned out to be an understatement. The entire archaeological site covers 540 acres and includes at least 26 pyramids. Basically, it’s the largest pyramid complex in the world. All of the pyramids were constructed of adobe bricks, and now, after 100s of years of rainfall and other factors, are in various states of erosion. If you created a small pyramid out of chocolate and set it under the hot sun for about 20 minutes (just an estimate; I didn’t actually try this), you would have a fairly accurate depiction of the current state of the pyramids at Túcume. The entire area is called Purgatorio by the local people and after it gets dark, they don’t dare enter the area.

After looking through the museum we got onto one of the trails that led to the archaeological sites. For this visit, we were off to see Huaca Las Balsas. We walked for about 25 minutes along the trail before we arrived at our destination. Along the way we could see many of the other pyramids on the site off in the distance, as well as some of the wildlife. There were many different species of birds, including burrow owls that seemed to enjoy looking at us as we made our way along the hot trail. A couple of times we saw some lizards that were laying perfectly still under the sun just before exploding into a top-speed sprint in no apparent direction, changing course at random until finally disappearing into some shrubs where they could hide.

Video: Raw Video of a Pyramid at Túcume

We arrived at Huaca Las Balsas to find the ruins of a temple that was dedicated to the worship of water. A building has been built around it with open walls to protect it from the elements. There is a ramp you can walk up that runs around the inside perimeter of the building, allowing you to view the site from all angles. At first glance Huaca Las Balsas looks like a big pile of dirt and clay surrounded by a tiny wall of adobe bricks. But as we walked clockwise around the temple, I started to see why the effort had been made to protect this place.

Before we made it to the first corner of the building I could see the first frieze that made up part of an excavated wall. A bit further and I could see another one on the far outer wall. As we turned the first corner, more mural art became visible and we could plainly see the ancient rafts, sea creatures, birds, and figures seated on a throne with their legs crossed. What had first appeared to be a big pile of dirt and clay to me was now beginning to take the shape of a building of some signifigance.

As we made our way to the second corner of the building I could see all of the friezes and had a very good idea of the layout of the temple due to the adobe brick walls that were there. It’s said that Huaca Las Balsas is a Lambayeque culture (Sicán) creation, and after looking at their masonry, my only observation is that I’m surprised that they weren’t all killed by structural collapses. On the picture below you can plainly see that the bricks just keep going up the ramp instead of being leveled out. I myself am not a mason nor do I claim to have expert knowledge of bricklaying, but I assume that as the wall keeps going upwards, it would just get weaker and weaker due to the added stress to the supporting brickwork. It’s something worth looking into and… I will get back on topic now.

As we made our way around the temple, each section was clearly explained (in Spanish) by plaques in the appropiate areas. Some of the plaques are in English also, and it’s worth nothing that, throughout my entire visit to the Lambayeque Department, the English here was the very best that I had seen.

The temple is still currently being excavated, so there are still rooms that are not yet visible.

Exiting the temple, we walked over to the small gift shop and looked around. There are wall hangings, cups, plates, books, pamphlets, shirts, and hats that you can purchase. I decided that I was going to buy something from the main gift shop back at the museum, so we left and headed back down the trail. Along the way, we stopped at some tiny adobe brick buildings that had been built for children to play in, saw more lizards and birds, a manmade lagoon, a garden in which all the plants have been labeled, and much more. 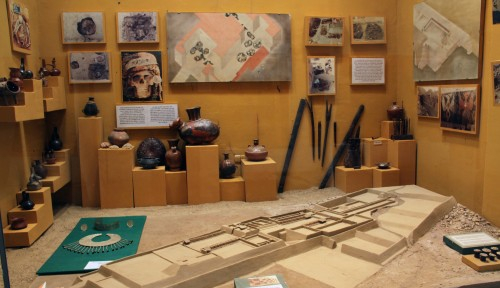 Throughout the site, the mountain known as La Raya is visible no matter where you stand and seems like a place to get a good view and some great photos of the entire Túcume site. In fact, there is a trail that goes up the mountain, where you can see everything, including Huaca Larga, which is the largest known adobe structure in the world, measuring in at 2300 feet long. That’s not too far under a half mile. And it’s something that I definitely would have liked to have seen. For this visit, however, it wasn’t meant to be. We made it back to the museum where I was going to buy a souvenir, only to discover that the gift shop there had closed for the day. Rats! My souvenir from Túcume will have to wait for another day.

The taxi driver had waited for us during our visit and drove us to the town of Lambayeque where we decided to eat lunch. The total cost of the taxi ride was 75 Soles, or $27. Not bad for the drive there, the drive back, and including the whole time that he waited for us, which was at least 2 hours, maybe more. A combi would have been much cheaper, but it sure was nice to have the taxi for the extra money spent.