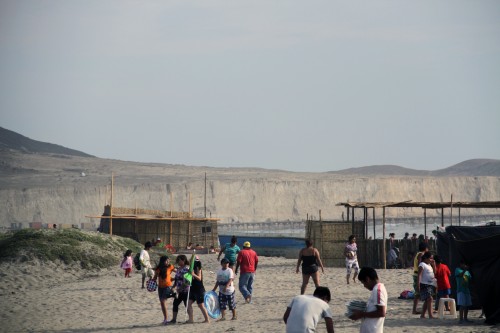 Playa Puerto Eten is a beautiful beach located in the village of Eten, about 15 minutes southwest of Chiclayo, Peru. You can get there by combi (van) or by taxi for 20 Soles if you haggle with the taxi driver (which is much easier if you’re going there with a local person who can do the haggling for you). I went there twice, once on a weekday and once on a Sunday.

For my first visit the taxi dropped us (myself and two friends) off at the top of the cliff that overlooks the beach. Peering over the edge, it looked to be a 20 to 30 foot drop. It could have been more; I’m horrible with judging vertical distances. It was a nice view. To the left I could see el muelle (fishing pier) and to the right was la playa principal, which is called El Ensueño. There were a few people enjoying the day on the beach, but since it was a little cloudy and a weekday, it would be easy to get any spot one desired to relax.

There would be no relaxing for me that day. We started walking toward the main beach where it was possible to climb down where the cliff dwindled and disappeared into a sandy slope. From there we walked to the water’s edge. This is where I got to touch the ocean for the first time in my life. The water was cool but not uncomfortable for swimming. I didn’t go swimming at all during my visit to Peru. I’ve seen too many movies and television shows about hungry or venomous sea critters that I get nervous about the thought of jumping into the ocean, which is funny because, as a kayaker, the rivers and strong currents don’t bother me at all. Put me near an ocean though, and I’m thinking, “No way am I going in there!” Perhaps next time I’ll give it a go.

From the main beach we were able to walk on the beach just below the cliffs where we arrived. There were a few boulders laying about but otherwise it was a fine sandy beach. Walking close to the waterline I could see the remains of the occasional fish or jellyfish. Soon we were scrambling up a rocky embankment to the fishing pier.

The pier is a flurry of activity, with boats coming in with their catch, trucks waiting to transport the catch back to town, people sitting on the dock and fishing, and mototaxis driving up and down the pier. After walking on the pier, I don’t envy anybody in the mototaxis. The pier is well-built, but the boards on the deck have some wide spaces inbetween them. I wear size 12 shoes, so I wasn’t too worried about my feet slipping through the spaces. For somebody with smaller feet, taking a walk on the pier could be nerve-wracking.

Video: Raw Video of Cliffs (From Above and Below) and the Fishing Pier

We walked about half of the pier when I was informed that we should turn around; one of the girls was nervous and didn’t want to walk any further on the pier. So I enjoyed the view from where I was and then we headed back. I noticed that anybody who wasn’t accustomed to walking on the pier was looking down, making sure their feet didn’t fall through the cracks, while anybody who worked there everyday was just walking along, not paying attention to where their feet were. After that, I kept my head up and took a leisurely stroll, not worrying about my feet while noticing the amused looks the girls got from the more experienced pier-walkers.

My second visit to Playa Puerto Eten was on my final day in Peru. It was a beautiful Sunday afternoon so we figured a day at the beach would be perfect. We arrived early in the afternoon and got a table with an umbrella near a beer stand that was selling only Cristal. Then we sat down and enjoyed the day. 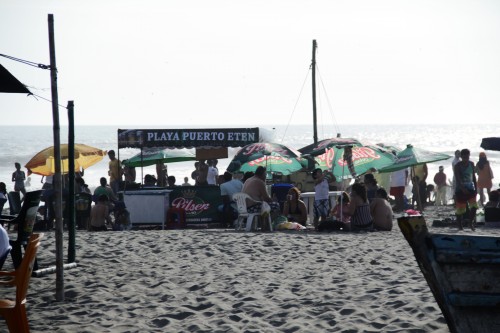 Sundays are the day that everybody goes to the beach. However, it wasn’t totally packed with people the day I was there, which didn’t bother me one bit. There was a nice cool breeze coming in from the ocean, the beers were tasting good, and there was good company and good conversation. There were no venders coming up to us to sell anything, and we were basically left alone, which was awesome! If we wanted more beer, we would wave the lady over and she would bring us a new bottle.

Now if you do want to buy something, you can buy food from one of the stands there. There are also people who are roaming about with carts selling ice cream and other treats. We were happy to stick to beer, and by the time the afternoon was over, we had had 9 of the big bottles. Feeling good, we left and found a small restaurant where I had some meat (I’m almost positive I had chicharrones) and another beer and then it was time to say goodbye to my new friends, which is always depressing. 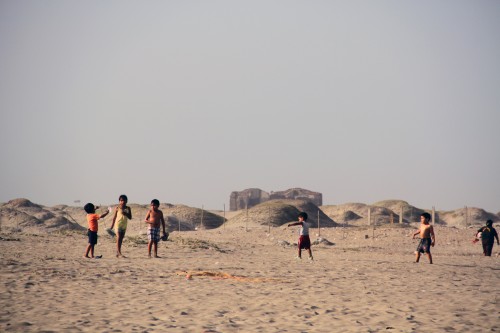 So without getting into that, my experience at Playa Puerto Eten was a good one, both times I was there. It didn’t have all the beachside restaurants like Playa Pimentel, but it was perfect for enjoying the day with friends and not overcrowded.