La Playa de Pimentel is where I first saw the ocean in real-life. Meaning that if I wanted to, I could walk up to it and touch it, which is something you can’t do from the window of an airplane, unless something’s gone horribly wrong. My first thought was, “Yep! That’s a lot of water!”

La Playa de Pimentel is located in the fishing village of Pimentel, about 10 minutes southwest of Chiclayo. It seems like a laid-back little town with a nice peaceful atmosphere and a nice cool breeze blowing in off the Pacific Ocean. We came into town by taxi from Chiclayo for about 15 Soles. Once the taxi dropped us off, we walked a block or two to the beach. And it was there that I first saw the ocean.

I had always imagined that seeing the ocean for the first time would be some grand, life-changing experience. That I would come to some kind of a realization that while the land ended here (or began, depending on your perspective), there was still a whole world waiting to be explored on the other side of that great watery barrier. Or that I would have the revelation of knowing just how small I am when compared to the rest of the world once confronted with the reality of that never-ending expanse of water.

None of that occurred to me. My first thought really was, “Yep! That’s a lot of water!” Then again, I’ve never been known for being a deep thinker.

It’s a nice little beach, I thought. For my first time seeing an ocean beach, I didn’t see a lot of dirtiness. The sand wasn’t white, but it wasn’t the brown color of the sand near Barranquilla, Colombia (which is on the Caribbean Sea and not the ocean). Jutting out from the beach is the Muelle de Pimentel. At 695 meters of length (2280 feet), there’s no way you can miss it. And beyond that is the ocean and the fishing boats going about their business.

El Muelle de Pimentel underwent some remodelling back in October of 2010 which went until November of 2011. I felt safe when I walked on it. I’ll admit I know nothing about fishing piers, but they appear to be made out of the same wood as railroad ties. Each railroad tie (floor board) is spaced about 3 inches from the next one so when you’re walking on the pier you can see the ocean waves beneath you. However, in the middle of the pier there are spacers between the thick boards that provide for a less nervous walk. I wasn’t nervous as I wear size 12 shoes, but for someone with small feet, I think the walk would be nerve-wracking.

Upon reaching the end of the pier there are a few food stands where you can get something to eat or drink; I didn’t pay too much attention to what they were selling. There are also some benches where you can sit down to rest and watch the ocean waves roll in. I enjoyed the view for a bit before heading back to solid ground.

By this time I had noticed the reed boats that many people were using. They’re called Caballitos de Totora and they’re used for fishing. The fishermen will straddle the boat as if riding a horse and then paddle out into the ocean to manage their nets, hauling back their catch in the back of the boat. The caballitos de Totora that I saw were about 11 or 12 feet long, but they can be as long as 16.4 feet. As a kayaker, I thought these boats looked like fun to paddle. I wouldn’t get the opportunity to try to paddle one though as I wasn’t dressed for getting wet.

There’s a nice walking path you can take that leads you past all kinds of restaurants and beer halls and souvenir stands. Ceviche and other seafood rule here, although you can find other kinds of meat. The souvenir vendors weren’t too aggressive. You can buy small replicas of the caballitos de Totora and some beautiful animals that are made out of seashells. I managed to not buy anything, although now I wish I had gotten myself a caballito de Totora souvenir. 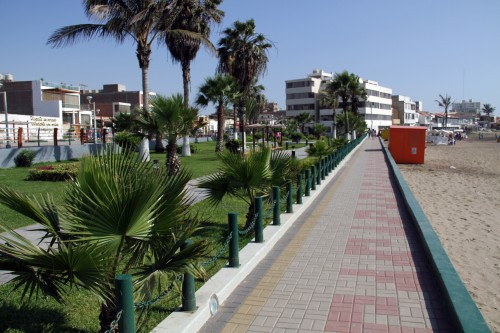 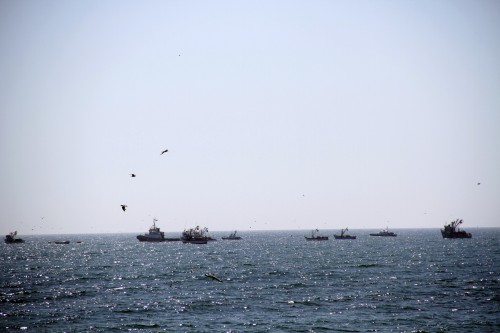 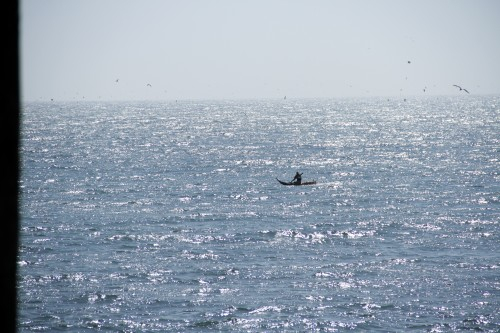 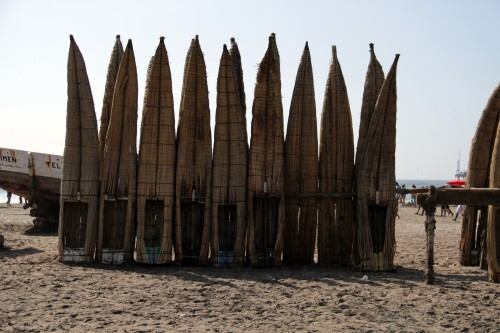 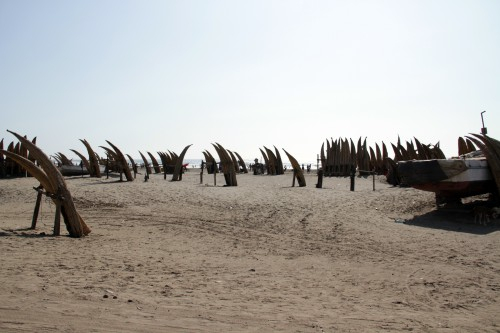 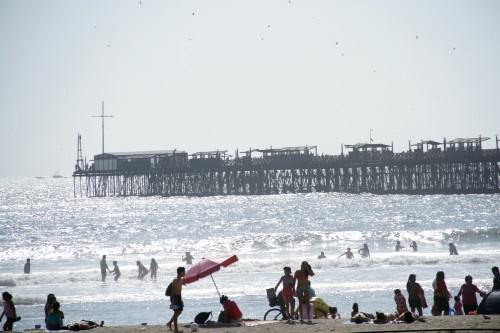 I didn’t take the opportunity to lay out on the beach to work on my tan, which with my winter skin would have led to a lobster-red Russell, but there is plenty of beach for laying in the sun. All-in-all, I thought this was a very nice beach to visit. If you like sharing the beach with a lot of people, come on a Sunday when everybody packs up and heads to the beach for some fun in the sun. Playa de Pimentel is a very popular beach because it’s so close to the city. If you don’t like sharing the beach, go on a weekday when it’s much less crowded.