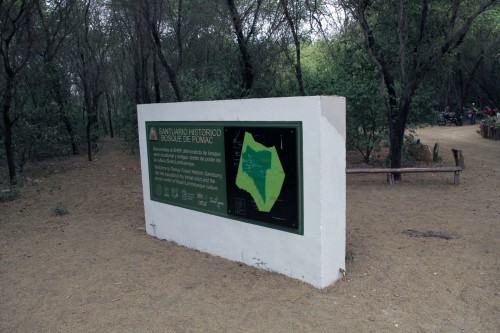 After visiting the Museo Nacional Sicán in Ferreñafe, we found a mototaxi driver who was willing to drive us to the Santuario Histórico Bosque de Pómac. The three of us managed to fit uncomfortably into the back of the mototaxi, with me, being the tallest, being the most uncomfortable with my knee shoved up against something-or-other in front of me. After 10 or 15 minutes of riding, we arrived at the entrance of the sanctuary. I paid the driver and we walked over to a small building (el Centro de Interpretación) to pay our entrance fee.

There was a young guy there dressed up in a ranger uniform and he told us all about the history of the Bosque de Pómac. The Bosque de Pómac is not only a dry forest, but within its borders are more than 20 pyramids built by the Lambayeque (Sicán) culture sometime between 900 and 1100 A.D. It was established as a Historic Santuary in June of 2001 and it covers 5887.38 hectares of land. It’s situated on the grounds of the Batán Grande sugarcane hacienda that had existed since colonial times. The owner back then paid people to search for gold within the pyramids so there are huge chunks taken out of many of them.

It is a great place for bird watchers with 89 species of birds, with 2 species that you won’t find anywhere else except in the northwestern region of Peru, the Cortarrama Peruana (Peruvian Plantcutter) and the Golondrina de Tumbes (Tumbes Swallow).

After the guy finished telling us the history of the Bosque de Pómac, I tipped him 5 Soles, and then we were free to walk around. The guy opened a gate for us and we started walking down a gravel road. After about 20 minutes of walking, we came to the first attraction of the Bosque de Pómac, el Árbol Milenario. The Árbol Milenario is a huge algarrobo (carob) tree that, after living for so many years, has seemed to have laid down on the ground and is getting ready for a very long sleep. And with good reason too. This tree is more than 500 years old and is the living symbol of all the other algarrobos of the country. You could say that it’s the “Legendary Algarrobo” if you were so inclined, and most any Peruvian would know exactly what you’re talking about.

After climbing around on the tree and taking pictures, we got a mototaxi and the driver told us he would take us to a good spot. Trusting him, we got in the mototaxi (after my friends negotiated the price, of course) and we took off through the forest (keeping to the road). After 20 minutes of getting my knee crushed up against the “something-or-other” (I’m just going to guess it was the back of the driver’s seat) on a bumpy gravel road, we stopped in an open area at the foot of a very large hill. The driver parked and we got out to look around.

Everywhere we looked there was forest surrounding this open area. And then there were mountains beyond the forest. Looking at the large hill, we noticed that there was a trail leading up the hill to a lookout spot about halfway up. One of my friends was feeling a little sick, so she decided to stay back with the mototaxi, while her friend and me started walking up the trail. One thing about the trail. It was not a place where you’d want to trip and fall. The path was clearly a path; there was no mistaking it, but there were large rocks to avoid and one step off of the path could lead to a steep, bone-crushing disaster. But since we took some care and stuck to the trail, we made it to the lookout spot where there was a small casita and a couple of benches where one could sit and rest.

From here we had a prime view of the forest. We could see the tops of the trees, and in certain spots we could see the Sicán pyramids rising out of the forest with the mountains behind serving as a backdrop. It was an awesome experience. However, it was a hazy day, and awesome experiences don’t translate well into the pictures of an inexperienced photographer when it’s hazy out. I got a few good pictures though; they’re just not as awesome as what I saw there in real-life. 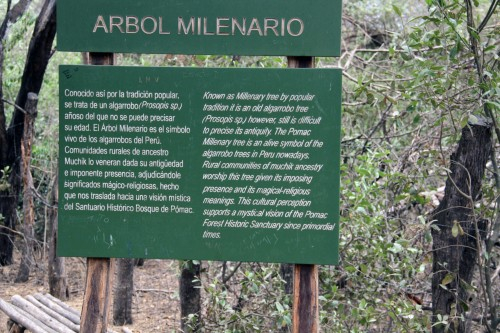 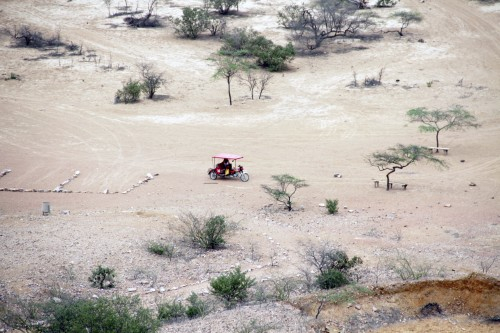 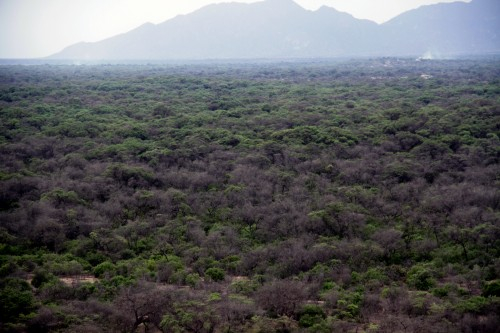 After some time, we came back down the trail and hopped in the mototaxi, which took us back to the entrance. Since the Bosque de Pómac isn’t in town, there’s a lack of any kind of transportation, so we just walked to the side of the highway and waited for somebody, anybody (PLEASE!) to pick us up. After listening to a nearby donkey braying, and then seeing some kind of large animal (huge dog? bear?) cross the highway and enter the Bosque, a combi finally stopped and picked us up. We happily got in and squeezed ourselves into the seats.

Video: Near the Entrance of the Bosque de Pómac

On the way back to Chiclayo, we came upon a funeral procession marching solemnly down the middle of the highway so we had to pull over and wait. The thought of taking photos ocurred to me, but better sense took over upon seeing everybody in the van crossing themselves as the pallbearers carrying the casket walked by. People crossing themselves being interrupted by the sound of a camera shutter clicking just didn’t seem respectful. Yes, I could have turned off the shutter sound, but still… Come on!

After the funeral procession had passed, the combi started moving again, only to pull over after two minutes to pick up another passenger. It was just after the van had stopped that I heard the crashing sound immediately behind me. I turned around and looked out the back window, only to see a little kid about 11 years old on the ground with his motocycle. He had crashed right into the back of the combi. It turned out that he was okay as he got up and picked the motorcycle back up. I was happy that there wasn’t going to be another funeral, but I was also a bit annoyed as the combi driver got out to survey the damage to the back of the van and then give the kid a tongue-lashing that lasted for about 15 minutes. But finally, the driver had exhausted his available anger, the kid took off, and then we were headed back to Chiclayo.

Video: On Our Way Back to Chiclayo